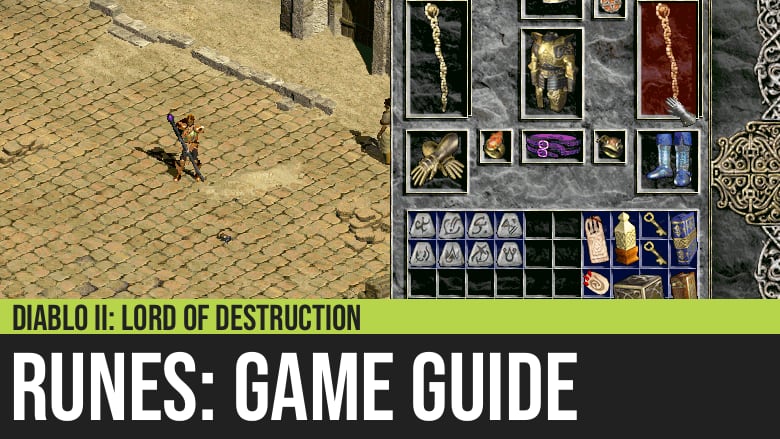 Runes, together with Runewords, are among the best innovations of Diablo II in its loot game mechanics. They were added to the game during the release of the expansion Lord of Destruction. Until today, there are no similar mechanics or as interesting that you can find in other loot-based action RPG.

Runes are items that you can socket on armor or weapons, to which they add a special bonus attribute. However, when you place a certain set of runes based on a recipe, that is when the magic happens. In addition to giving each rune's bonus attribute, they transform the socketable item into something else more powerful than the sum of each rune. They produce a synergy and create a new item, called a runeword.

A common question asked is, can I unsocket my runes from a runeword after it has been created? Let's say that you found a better base weapon for your already existing runeword. Can you take out your runes and use them again?

The official answer is - there is no existing Horadric recipe for gaining back the runes. However, there is a recipe for removing the runes to claim back the base weapon or armor. The runes will be lost, though, and this is not what you want to achieve.

All the runes can be upgraded to their next tier version. You will use the Horadric Cube and the corresponding recipe to make the transmutation. In the table below, we included the recipe needed to craft each rune, using its lower-level version.

A common question is - if I can upgrade a rune to its higher version, can I also downgrade a rune to its lower versions? The official answer is - there is no existing Horadric Recipe for downgrading runes. However, if you get lucky and if this is what you want, you might find a mod or plugin that will allow you to do so.

The game mechanics for creating runewords with the help of runes are as follows:

The game has a way of giving your guaranteed runes either through quests or farmable monsters. Though the runes are guaranteed, the specific rune types you will get are still random.

After completing this quest, Qual-Kehk will give you exact and guaranteed runes:

In this quest, your goal is to break Mephisto's Soulstone in the Hellforge. It will always reward you with one rune. However, it is random. It can be one of the following:

You will soon realize that this is the most repeatable and predictable way of farming runes of various tiers. The rune is not guaranteed, but it has a very high chance, to the point that sometimes more than one can drop. She can even drop up to six runes if you get lucky.

There are 33 runes in total, and they are typically grouped based on their rarity. All of the runes can drop in Hell mode. However, some runes are almost impossible to be found in Normal or Nightmare.

There are 11 runes in this group, starting from El to Amn. They all drop in Normal mode and can easily be farmed with the Countess.

There are 11 runes as well in this group, starting from Sol to Um. They will only start appearing in Nightmare mode.

These are the 11 rarest runes in the game, starting from Mal to Zod. As expected, they will only drop in Hell mode. They are needed to craft the most powerful and versatile runewords known in the game.