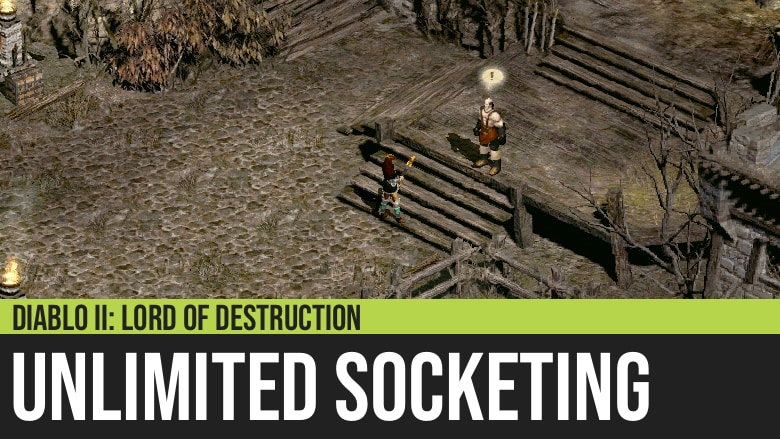 There are many features in Diablo III that improved upon Diablo II, especially on the Quality of Life Changes. Socketing and unsocketing are two of these improvements that can be done easily in Diablo III but are borderline impossible in Diablo II.

If you are interested in learning how to make unsocketing possible in the game while preserving the socketable items, read our guide here.

Now to our main topic. In Act V, there is a quest named Siege on Harrogath where Larzuk will request you to slay Shenk the Overseer. After completing the quest, he will reward you with an offer to put sockets in one of your items.

This can only be done once per game, though, similar to the Imbue reward of Charsi. You may ask, is it possible to make this reward unlimited?

Before we look at the solution, let's first discuss whether this breaks the game's integrity? Does this offer an unfair advantage to the point that it is considered cheating the core of the game?

Our view on this is that making Larzuk's socketing services unlimited does not break the game's integrity in the same way that we can increase the size of the Horadric Cube without gaining an unfair advantage. In the case of the cube, enlarging it saves you the time to travel back and forth to the town. It does not give you any immediate combat advantage when you are at the exact moment of fighting monsters. Making the socket reward unlimited saves you the time of creating a new character, transferring an item to that character, and then using the reward of Act V and returning the item to the original owner. It is a quality-of-life change and does not impact the actual states of combat or the loot hunt's mechanics.

With that covered, how do we make Larzuk's reward unlimited? The solution is not straightforward as it involves changes in the code of the program.

If you are interested in doing the fix yourself, you can get the details from here - https://d2mods.info/forum/viewtopic.php?t=62121. It involves changing the code of one of the libraries - D2Game.dll. The code change is in assembly, though. Most readers of this guide will not be able to do it.

Fortunately, there is already a dll containing the code change and that you can download it. Go to the same url shared above and scroll to the second forum post. The link to the dll is provided in dropbox - https://www.dropbox.com/s/d4v9twtygv0oz14/D2Game.rar?dl=0.

Unzip the file, copy, and then paste it in your Diablo II program folder.

If you have already used the reward of Larzuk, this will not work. But if you have not yet used it, then it will become infinite. With the code change in the dll, using the reward never completes the quest. Hence it becomes unlimited.