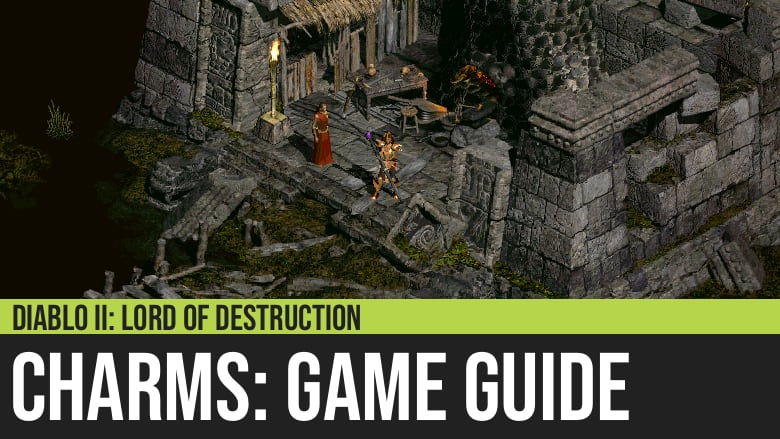 There are many game mechanics in Diablo II that make it unique and contributes to its timelessness. You would wonder why other games have not adopted some of these features yet. Charms in Diablo II are among these unique features that you will not find elsewhere. For a collection game, the concept of a charm is revolutionary.

A charm is an item in Diablo II that contributes something new to your character as long as it is present in your inventory. The concept is very simple, but it has a lot of depth. This new contribution could be anything that has relevance to your hero, like additional health, mana, resistance, elemental and physical defense and offense, energy, character attributes, and even skill points.

Charms were first introduced in the expansion Lord of Destruction. Together with Runes and Runewords, they elevated Diablo II's itemization and made it the best loot-based game.

Small charms take one box in the character's inventory. As they are the smallest in size, charms with good affixes, like Resistance, Life, Max Damage, Attack Rating, Elemental Damage, and Magic Find, are very popular among players.

In addition to the good charms above, the best charm in the whole game is an instance of a Small Charm, the Annihilus.

The Annihilus is a unique charm with amazing benefits for your character. It only drops after defeating Uber Diablo while playing online through Battle.net. Hence it could not be found in Single Player, LAN, or any other play mode that is not on Battle.net. However, with the plug-in called Plugy, you can acquire this special charm.

Large charms take two boxes in the character's inventory. The second best charm in the game is an instance of a Large Charm, the Hellfire Torch.

The Hellfire Torch is a unique Large Charm that is an excellent inventory item for any character, especially for the endgame. Similar to the Annihilus, it's only available online through Battle.net. You have to complete an endgame event called the Pandemonium Event to acquire this.

It is challenging as well as tedious to complete the requirements for this special torch, but it definitely worth it. Also, you would need an endgame character with already existing good items to defeat all the enemies for acquiring this loot. It is a guaranteed drop, though the items for its completion will need some farming.

Grand charms take three boxes in the character's inventory. They are the most commonly collected items in the inventory by loot hunters, as the third-best kind of charms are Grand Charms, the Skillers.

Skillers are Grand Charms that add a point to a character class' skill tree. These are commonly farmed by players and are the most commonly held items in the inventory.

There is also a unique Grand Charm that can help you with merchants in the game, the charm named Gheed's Fortune.

Gheed's Fortune is a Grand Charm that increases your gold drop rate and magic find. Hence, it is very useful for farming when using a magic-find build. Also, it reduces the price of items with the merchants. Unlike the Annihilus and the Hellfire Torch, this is not a guaranteed drop associated with any events or monsters. It drops as random loot in the game, commonly in Hell mode.