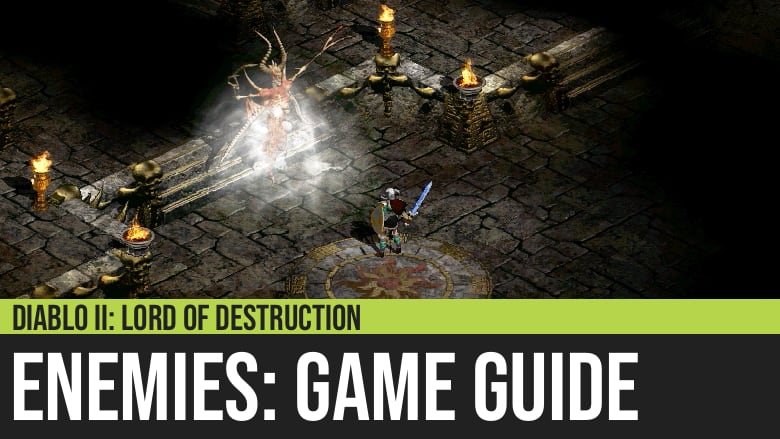 The real stars of the Diablo games are the monsters, more than the loot, or the heroes, or the characters you meet in your adventure. You play the game because of these enemies. You collect the loot to fight these monsters, and without them, there is no tension or challenge in the game. The value of your item collection is only proportional to the power of the creatures you will slay.

Diablo II has a large variety of monsters, as compared to other action and adventure games, like Zelda or Dark Souls or Monster Hunter.

Diablo II has an interesting monster categorization, one that you will rarely find in other games. This categorization relies on simplicity; however, it has depth, making it one of the strongest features of the game. It increases the variety of the enemies, while maintaining familiarity from the player, and at the same time, keeping development costs low for the designers.

Diablo II is not like that. It can use the same monster but vary its behavior, not just its health pool and attack power. For example, a monster might gain a resistance, or immunity, or a new offensive capability against the hero. This makes the enemies in Diablo II more exciting than most adventure and action RPG out there. It was really designed for long hours of play.

In addition, Diablo uses the concept of named monsters. You rarely see this in other games. For example, in both Zelda and Monster Hunter, all monsters of the same kind are the same. Not in Diablo II. Some monsters have names, which makes them unique and memorable. Diablo II even created two categories for such monsters, called Unique Monsters and Super Unique Monsters.

These are the base monsters of Diablo II. Even at this level, the monsters have a large variety - every standard monster in Diablo II has a variant.

To make it simple, consider these two terms from Biology: Specie and Breed. A dog is a specie that is different from a wolf or a monkey. However, a Pitbull is a breed and belongs to the same dog specie as that of a Dalmatian breed.

In the same way, the standard monsters of Diablo II have variety. Instead of the words "specie" and "breed," Diablo II uses the words "class" and "variant."

For example, the monster class Zombie has the following variants.

And so on. And we are just at the base level, the standard monsters. No other game has this kind of depth when it comes to monster classification. A similar franchise that comes a little close is Monster Hunter, but even that game falls short to the simplicity and depth of the monster variety and mechanics in Diablo II.

Champion monsters are stronger versions of Standard monsters. How do you know if you are facing a champion or a standard monster? Champions appear with blue color names. Each of these names will be randomly generated and will give the monsters different bonuses, depending on the resulting name. Champions have a higher chance of giving better loot than Standard monsters.

The Champion category is further divided into five sub-categories. During the release of Diablo II, there were no sub-categories, just plain champions.

All the five Champion sub-categories below have an increase in monster level, experience, and hit points.

Unique monsters are even stronger than Champion monsters. How do you know if you are facing a unique monster? A unique monster will always have a golden-colored name. They are called unique because there is only a single instance of them in the current game. However, this name will be random, and the location where you will meet the monster will also be random.

Unique monsters are stronger than champions because they always spawn with additional abilities. Each time a unique monster is generated, random bonus abilities are added to it. Also, unique monsters always appear with a small pack of Standard monsters called minions. Similar to Champions, they also give more loot to the player.

We shared above that Unique Monsters are generated in random locations in the game. What happens if we have a Unique Monster that is always generated in a fixed location? Then you will have what is called Super Unique Monster. Not only do they have a known place in the game, but their names are also fixed, and hence, their attributes and bonus abilities.

Super Unique Monsters are the strongest category of monsters in the game. They include the most popular enemies in Diablo II, like the act bosses and the quests minibosses.

The Super Unique Monsters can be further divided into sub-categories, depending on when you meet them in your gameplay.