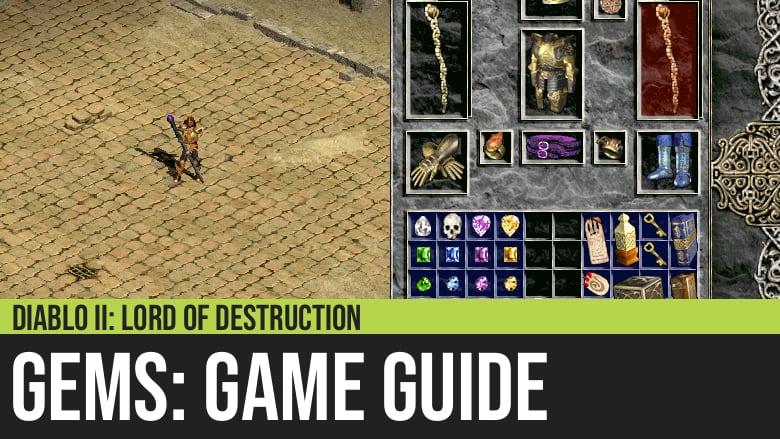 Gems are socketable items in Diablo II, similar to runes and jewels. Though they are the least powerful of the three kinds of socketables, they have many significant uses in various Horadric Cube recipes. Also, they are the most common to find and easiest to collect among the three.

Similar to runes and jewels, there is no existing method to claim back the gems once placed in a socket. However, there is a recipe for removing them from socketable items. The gems will be lost, though afterwards.

There are seven kinds of gems in the game, and each of them gives a bonus attribute when socketed.

Gems have five qualities, from lowest to highest.

All of them are useful for Horadric Cube transmutations, even the chipped ones. You will need them for upgrading runes and even for upping unique weapons and armors.

Gems can be upgraded to their next quality level without using any other upgrade material. All you need is the Horadric Cube. The formula for upgrading through transmutation is consistent across all qualities:

Gem Shrines can help you in increasing your gem collection. It follows these game mechanics:

The Hellforge Quest in Act IV will reward you with guaranteed four gems. You have to pick them up manually, though. Regardless of the difficulty mode, you are playing, one of the gems is a guaranteed perfect quality gem. You can also get runes from this quest as a reward.