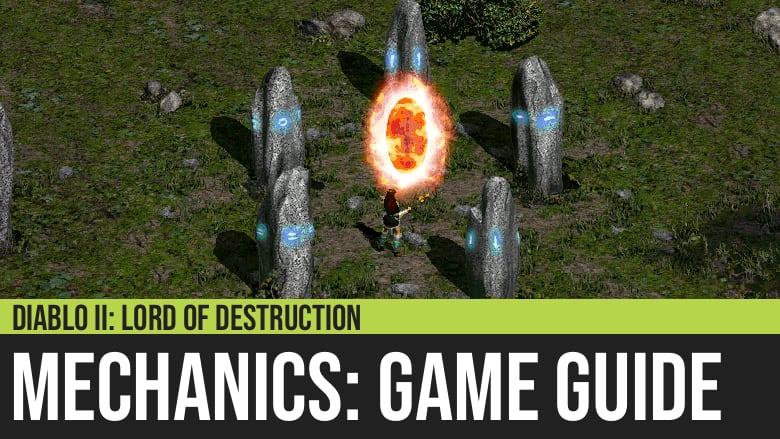 During the development of Diablo I and Diablo II, one of the guiding principles they have is "Easy to learn, hard to master." The Diablo games have this simplicity that hides their depth, making them an engaging play for both casuals and hardcore fans.

You can enjoy a Diablo game whether you play it for 10 hours or 1000 hours and whether you fully explored and utilized its features or just played it in one go in normal mode.

This characteristic is a reflection of the well-thought mechanics that govern the game.

At its core, Diablo II is a collection game. You kill monsters to collect loot. This will enable you to slay stronger monsters or be faster and more creative in doing so, but the main loop of the game is to collect better and more powerful items.

Hence you will need a place to store all of this loot. Diablo II has two locations where such items are placed - the inventory and the stash.

Note that although we identified Diablo as a collection game, the storage that the designers provided is minimal. At first glance, it looks like a mistake or a bad design. However, decisions like these are rarely accidental. There is intended behavior for every game design decision. Regardless of the intent, the final storage size that came up with the release version of Diablo II is small. And even after the release of the expansion set Lord of Destruction, they did not increase the storage.

The inventory is the equivalent of the backpack for the player's hero. It is the storage that comes with you when you journey in the game. And it is extremely limited. It consists only of 40 boxes. That means if you put five shields in your inventory, it's almost filled up.

The private stash is your larger storage that gets left behind in the town. We used the word larger, but it's actual still minimal, much smaller than expected for a collection game. It consists only of 48 boxes. That means if you store six shields and three boots there, it's full.

Why is the storage so small?

We shared earlier that game design decisions are rarely accidental. These decisions are made to influence player behavior. How will the fans play the game if they know that the storage is limited, for a collection game? What will they do to circumvent such limitations? And what will be the impact of these actions in the longevity of the game in terms of playability and re-playability?

Once you placed items in your storage, you would want to view their details. You can do this by hovering the mouse on top of them. This is what is called "mousing over." And by moving the mouse in the storage, the highlighted item changes the information adjusts accordingly.

However, you would not be able to view the information for "unidentified items," which we will cover below.

You move your items between your stash, inventory, and character by drag-and-drop of the mouse. Different things occupy different space sizes, for example, armors, shields, and weapons occupy more space than smaller items like rings, gems, or potions.

The belt in Diablo mimics the function of a real tool pouch. When developing your character, it's one of the items that have a significant impact on your gameplay, as it controls the number of things you can carry - whether they are scrolls or potions. A character gets four slots by default for storing consumable items. These four slots can be mapped to keyboard shortcuts. With the help of a good belt, you can increase the storage capacity up to a maximum of 16 consumable items.

Later in the game, you will discover and gain a unique treasure that allows you to transform items from one form to another.

This loot is unmissable as it is required in the completion of several mandatory quests. However, its impact on the game is significant. Almost every important item that matters to the player, whether they are runes, charms, gems, armor, or weapons, can be enhanced by this powerful artifact, called the Horadric Cube.

The Horadic Cube introduces crafting in the game. It is relevant to the story as you would not be able to progress and complete two acts without using it. By making the usage mandatory, the game designers make the player familiar with it, enhancing his gameplay and increasing the fun of his loot hunt.

There will be various recipes that a player can use to utilize the cube. Most of these recipes will not be discoverable in the game itself - no character or lore or in-game guide will teach you what they are. Nor will there be discoverable recipes that you must first acquire before you can use them - you just need to know what the recipe is, and you can use it right away.

Scrolls are essential consumables in the game. They are so important that at the start of a new playthrough, the only items your character has are two scrolls - a Town Portal scroll and an Identify Item scroll.

Like other items in the game, scrolls drop as loot when you kill monsters. They also come as treasures from chests and stashes. Each scroll occupies a box in your storage. And since the storage is minimal, it would help you to save space by buying Tomes. A single Tome can contain up to a maximum of 20 scrolls. By carrying two tomes - one for portals and one for identifying items, you are all set up.

By default, most items you pick in the game are already identified, meaning their information shows up when you mouse over them. However, for rare and unique loot, they will be unidentified by default. You would have to explicitly unlock the information of this item by using an Identify Item scroll.

This game mechanic is useful because it gives you a sense of excitement. You can look forward to identifying the items. It's like a slot machine - you don't know what you will get. It could be a jackpot if you get lucky.

The Town Portal scroll could be the most important consumable item in the game, as you would not be able to go back instantly to the town without it.

It also has a strategic use in the gameplay. If you think you are going to a dangerous area in the game, like when you are about to fight a boss, you might want to open a portal first. When you die, you will be revived in the town, and then you can quickly go back to the previous location, using the portal you have opened.

You can also use the portal to escape and easily return to the town, maybe to stock up on consumable items or to get a free heal from some NPCs like Akara or Mala.