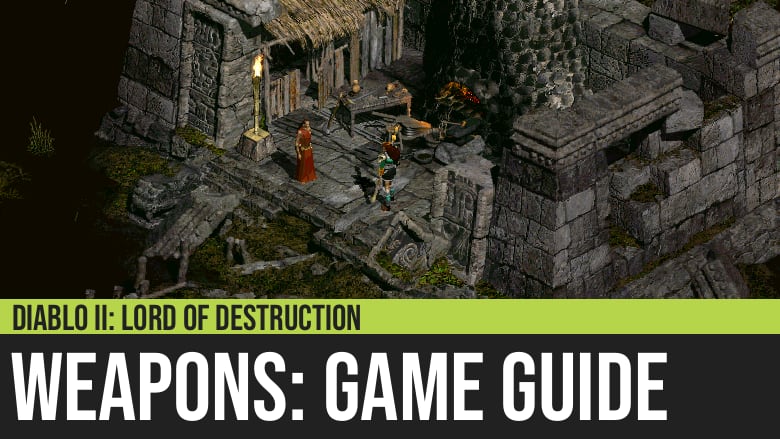 Weapons are among the most treasured loot in a collection game like Diablo II. As weapons directly correlate to the fantasy of becoming a powerful game character, knowing their mechanics is a must for an ardent weapon hunter.

Similar to armor, weapons open up the possibility of creating unique, powerful, and fun builds in Diablo II. At a minimum, a good weapon should help you complete the various modes of the game, from Normal, Nightmare, and Hell. When you reach the endgame, hunting for the best weapons will give you hundreds of hours more of playtime.

There are thirteen types of weapons that you can find in Diablo II. Some of these weapons are best used when matched to the proper class they were designed for. As an example, bows are typically best used by the Amazon class, while staves are best matched for the Sorceress class.

Some weapons can only be used by specific character classes.

It is important to understand and differentiate between weapon Quality Level and Tier Level. It is easier to explain it by example rather than by concept.

Let us consider a specific weapon - a polearm.

The tiers of a polearm, and any other weapon, will always be three:

Tier refers to the grouping of the weapons belonging to the same weapon type, and it's always in three - Normal, Exceptional, Elite.

In the above example, we used the weapon type polearm. Let's continue with quality level using a specific kind of a polearm, say a Voulge.

The quality levels of a Voulge, and any other weapon, will be as follows:

Quality refers to the rarity of a weapon and is independent of its Tier.

Weapons in the game are categorized based on their rarity and how they are obtained.

Low quality weapons have a prefix that says:

If you find a weapon like that, then it's better not to use it. Such a weapon has:

So if you are thinking of using it as a crafting material for runewords, don't proceed.

Low-quality weapons can't be ethereal, and they can't drop with sockets by default. You can, of course, add sockets to them manually. But as shared above, it will be a waste.

This the default state of a weapon, as it is neither low quality nor superior.

Superior quality weapons have a prefix that says Superior. Such items have improved Damage and Durability.

Superior weapons can spawn as ethereal. Also, they may have sockets as well, if the weapon type supports sockets. In other words, these are the best candidate as base weapons for runewords.

Magic quality weapons are always shown in blue text. In addition to their standard attributes, they gain bonus properties that make them better than normal items. Such extra properties appear on the details of the item as prefixes and suffixes.

Rare quality weapons are always shown in yellow text. They are similar to Magic items, but they have more bonus properties. These are often upgrades for your character when they drop. You can often get them from slaying the bosses.

Set quality weapons are always shown in green text. In addition to their bonus attributes, they have synergy with other items belonging to the same set. The number of bonus properties increases the more items you wear from the same set. And finally, if you wear all the set items, there is a large bonus plus a magical reward, like a change in the appearance of your character.

Unique weapons are the best items in the game, excluding some runewords, of course. They are the reason why the loot hunt of Diablo II is exciting. You will typically need to farm act bosses to get these really rare items.

Crafted weapons are those created using the Horadric Cube using the various cube recipes. These are not the same as the runewords, though. You can complete the game without using crafted weapons, as they are not really useful in Nightmare or Hell mode.

The best and most powerful weapons in the game belong to this group. Runeword weapons are god-tier level, as they enhance your character to a point not possible before. They are very similar to unique weapons, except that you have some control in their creation - giving you the option to choose:

It gives you that satisfaction in investing more, if you want, in the creation of your best weapon.

Durability is a property of a weapon that reflects how strong it is. It is a quantity that reduces in value when a character performs physical attacks. When it reaches 0, the weapon becomes unusable. This broken weapon needs to be then repaired at any of the town blacksmiths.

Ethereal weapons were added in Diablo II during the expansion Lord of Destruction. They follow these game mechanics:

There are two reasons why Ethereal weapons are valuable for players:

Socketed weapons spawn having sockets by default. Normally you would put sockets on an item using the following two methods:

Finding a socketed weapon is the third method. They always appear having grey text, similar to ethereal items.