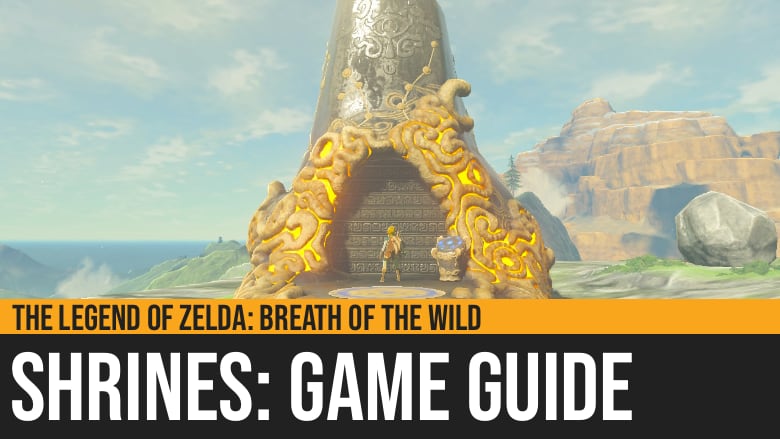 The Legend of Zelda: Breath of the Wild - Shrines Guide

Shrines are one of the most exciting features of BOTW. They are dungeons that have to be cleared to get a reward at the end. This reward could be in the form of a skill, a weapon, an armor, or even crafting materials. Regardless, there is always an Orb waiting at the end for Link as an additional reward.

Shrines are self-contained structures scattered in the Land of Hyrule. You will encounter them regularly while you travel on your adventure. They vary in sizes, complexity, and challenges, but most of them are miniature versions of dungeons containing physical and logical challenges and puzzles.

Parts of a Shrine

All shrines in the game have the following features.

Every shrine has an entrance, and in the entrance, there is always a pedestal where you can place your Sheikah Slate to activate the shrine. Upon activation, the entrance of the shrine becomes a fast travel destination. You can now teleport to it anytime.

You have the option now of entering the shrine or leaving it for later. But regardless, it's already permanently included in your map, and it's enabled for teleportation.

The main reason for entering shrines is for their treasure, and of course, for their Orbs. Shrines contain at least one treasure chest - there should always be one. Whether you can find it easily is a different topic - some of the treasure chests are intentionally hidden. This is because they are not mandatory, looting a treasure chest is up to you, and as long as the shrine does not require the content to be used in solving its puzzle, you can leave it for later. Why would you do this? Treasure in the chests gets upgraded as you progress in the game. The later you open the chests in your gameplay, the better the treasure is.

At the end of every shrine, there will be an altar containing a monk. It's impossible to complete a shrine without reaching the altar, so this not missable. And finally, you will get a guaranteed reward here as well - a Spirit Orb which the monk gives to you. You can use this for upgrading your Stamina or Hearts.

The joy of discovering shrines is part of what makes BOTW a satisfying adventure game. There is a total of 120 shrines scattered in the Land of Hyrule. Some of them will be easy to find, and some will take your hours to discover.

Most of the shrines are visible from high locations, especially during the early and middle parts of the game. Just go to a tower and observe the nearby areas - you will surely find a shrine. And with the aid of the Sheika Slate, you can zoom-in and put a pin so you can visit them afterwards. You can also paraglide to the shrine, solve its content, and then just teleport back to the tower to look for more.

You will soon find out that the other shrines are not like this, though. They are simply not visible from any location, because they are:

It is not guaranteed that you will find a shrine in any new location you visit, but what we know for sure is that exploration is often rewarded in the game, and shrines appear in the most unexpected places.

In the early part of the game, you will be given a tool that can greatly increase your chance of finding shrines and can make the hunt much easier. This tool is the Sheika Sensor, made available just on the first tower you meet, after leaving the Great Plateau.

Can you miss this tower and this tool? No, because this tower can be any of the fifteen available towers in the game. Most players might assume that the tower that grants the Sheika Sensor is the one near Dueling Peaks. However, this is just a coincidence, as the first major quest involves visiting Impa, and most players follow the path that leads to this tower. Hence, there goes the assumption that this specific tower is the source of the Sheika Sensor. But it could be any of the other towers after the Great Plateau.

The Sheika Sensor, as its name implies, is a detector of shrines. It alerts you when a shrine is nearby and gives you the direction by following the increasing strength of the alert it makes. It is represented by an antenna icon on the Sheika Slate. When a shrine is available in the nearby areas, the sensor starts glowing. The beep and the glow of the sensor increases when you move in the right direction towards the shrine: the better the alignment, the more active the sensor.

Similar to towers, shrines are high-priority goals when it comes to exploration, as they offer permanent benefits to Link and valuable rewards that can aid his adventure.

There are 120 shrines in the game, and you might not be able to find them all on your own, though it is highly suggested to try your best and explore to discover them. Regardless, whether you will spend days looking for the last few shrines or go to Youtube and do your exploration there, here is an alphabetic listing of all the shrines.