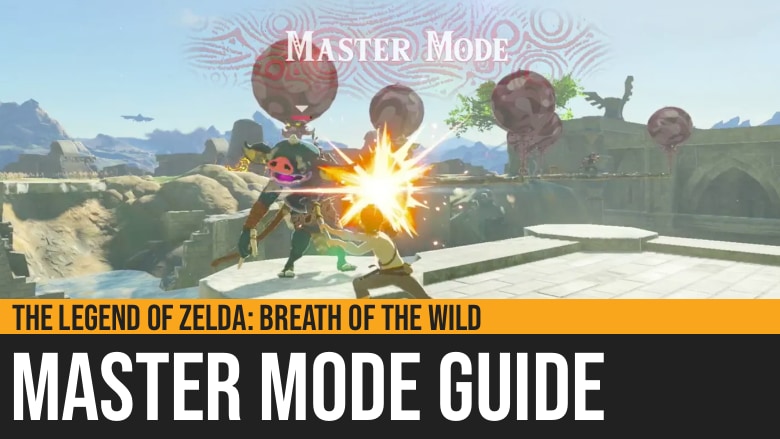 The Legend of Zelda: Breath of the Wild - Master Mode Guide

When the Legend of Zelda: Breath of the Wild was first released, it only has one mode of difficulty. With the release of the first expansion, The Master Trials, a new level of play mode was introduced, the Master Mode.

Master Mode was designed to give the players a heightened challenge. It primarily increases combat difficulty, in addition to new changes that enhance the gameplay.

Master Mode has a dedicated save slot, so you will not overwrite your existing Normal Mode progress. You will only have a single manual save and autosave slot, though. But for a player looking for a good challenge, that is more than enough.

Master Mode is accessible without completing the game in Normal mode. You can progress your adventure on both at the same time. However, the Normal Mode save file will be created first, as it's the default setting when playing the game for the first time.

Monsters in BOTW use a color code to signify their health and attack power. As your hero develops and progresses the game, the monsters upgrade as well, and this is made visible by a change in their color.

At the beginning of the game in Normal Mode, most of the monsters begin with color Red. With the Master Mode, they are all upgraded by one level by default. For example, instead of seeing Red Bokoblins in the Great Plateau, you will see Blue Bokoblins instead, and so on.

However, the weapons that these upgraded monsters carry do not change and remain consistent with their Normal mode counterpart.

This means that in your adventure, the monsters you fight are harder by default.

A New Level of Upgrade for Enemies

The color-coding scheme for monsters in BOTW maxes at the color Silver, which represents the most dangerous enemies in the game.

With the Master Mode, there is a new level of upgrade for enemies, the color Gold. You will see gold colored Bokoblins, Moblins, Lizalfos, and Lynels. Their attack behavior will not change, though, but they will have a larger health pool and stronger resistance to elemental damage. Similar to Normal Mode, you will not meet these challenging monsters until you have advanced your game's world level difficulty by defeating monsters and bosses.

Among all changes in the Master Mode, this is the one that racks up the challenge drastically. As a game mechanic, it's even more challenging than anything in Dark Souls. You can easily counter stronger and buffier enemies with upgraded weapons and armor, but health regeneration is a different kind of challenge that can frustrate some players. This game mechanic eliminates the tactic of slowly chipping away at the health of an enemy. Also, it makes it extremely challenging fighting multiple enemies simultaneously, especially when they have reached Silver and Gold level.

To successfully counter this new monster capability and minimize frustrations, below are the mechanics of the health regeneration:

All Guardian Enemies are More Powerful

Earlier, we shared that monsters have a color-code scheme representing their health and attack power. This color-coding does not apply though to Guardian enemies. Hence, in the Master Mode, you will still face the same kinds of Guardian enemies as before. However, they are all upgraded versions, stronger and more aggressive.

As an example, in the Great Plateau, there is a shrine where you face a Guardian scout. Normally you will just hit it twice, and it will explode. But now, with Master Mode, you might have to use up a few more weapons before you defeat it. It will not be uncommon that you might end up using all your weapons just to defeat a single guardian.

Of course, this being a Zelda game, there is a way to counter this. We will cover this in the topic of the Trial of the Sword, where you can get an over-powered version of the Master Sword.

Also, there is an upgrade that is unique to the full-size Guardians, both roaming and stationary. In Normal Mode, deflecting their beams is a deterministic way of defeating them. You just need to become familiar with the timing, and fighting Guardians become a rhythm of beam-and-deflection. With the Master Mode, the Guardians learn how to derail your timing by adding a new firing delay. It is something you will adjust to in this mode.

This new capability of monsters enables them to detect Link over longer distances than before. This will reduce your chance of making stealth attacks.

However, the existing game mechanics of stealth still apply as before:

Among all the new features of Master Mode, this is the one that adds the most fun in your adventure and exploration. Your journey becomes more dangerous because there will now be outposts for enemies through floating platforms. And they are strategically placed - they are present in bridges, crossings, and cliffs.

You can ignore them, but you will also miss the good loot present in the treasure chests placed on the platform. Especially in the early part of the game, in the Great Plateau, these chests from the platforms can give you good weapons to be able to defeat those blue Bokoblins. Take note, though, that these enemies will be using more advance range weaponry - using fire arrows, electric arrows, and even bombs. It is a high risk with high rewards.